X is for Xtra (Wild Card) 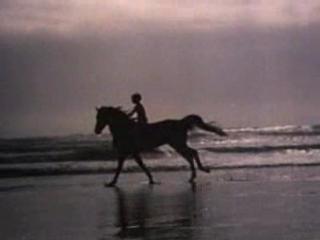 THE STORY: A boy named Alec and a wild Arabian stallion are the only survivors of a shipwreck, washing up on the beach of a deserted island. Alec and "The Black" learn to trust each other and thrive in their island paradise. Eventually they are rescued, but modern life has lost its appeal as both recall their days of freedom on the isalnd.

ABOUT THE BLACK: This horse is a survivor -- imprisoned by Arab traders on a ship, swimming for his life when the ship explodes, and trapped by tangled ropes among boulders on the island. Alec is his only friend; he saves the horse's life and the horse saves Alec's. When they are rescued, The Black experiences new adventures as a race horse trained by none other than Mickey Rooney.

Name three things you'd like to have with you on a deserted island.
Posted by Luana Krause at 5:00 AM