I will be taking some time off from blogging for a while. Thank you all so much for you support and encouragement. Not sure when I will resume but I will keep you posted.

This Week at the Movies 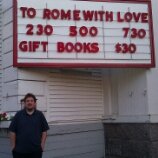 I'm in Boston this week on vacation and I've been going to the movies a lot. The weather is so hot and humid that the cool refrigerated atmosphere of the cineplex is a welcome reprieve.

Ice Age 4: Continental Drift (Papa Mammoth Manny is worried about losing his little girl ... as well as it being the end of the world. Scrat, in his enthusiastic pursuit of an acorn, spins the Earth's core like bowling ball and starts the continents to drift.)

To Rome With Love (Alec Baldwin guides Jesse Eisenberg is his relationships. Meanwhile Woody Allen acts as impresario to an opera singer who can only sing in the shower. Best Line: "Go ahead. Walk into the propeller.)

Total Recall (Colin Ferrell goes for one heck of a ride. Is he secret agent? Does he have a wife? How can he crash his car so many times without breaking every bone in his body?)

Whew! And that doesn't count what I saw on DVD:

The Lightning Thief (The Son of Poseidon tries to clear his name and in the process must rescue his mother and defeat the real lightning thief, Luke, Son of Hermes. There is also a crazed five-headed dragon that is turned into stone by the head of Medusa aka Uma Thurman.)

Underdog (Non animated version of the classic cartoon. Doesn't come close to the adorable Shoeshine Boy of my childhood. But I must say ... this beagle ROCKS!)

Anatomy of a Murder (James Stewart, Lee Remick and Ben Gazzara in a murder mystery that was pretty risque for it's time. Didn't know you could say "b***tch" in the movies in 1959.)
Posted by Luana Krause at 1:07 PM 1 comment: