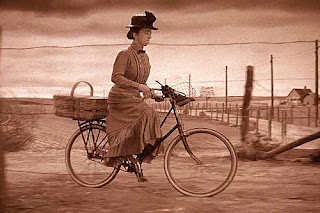 I've been watching the Wizard of Oz since I was knee high to a Munchkin, so it's only natural that my first memory of a movie villain would be the one and only Miss Gulch aka The Wicked Witch of the West.

Watching this movie as a young girl, I related to Dorothy and hated the Witch. But now that I'm "old" -- I relate more to the Witch. I understand Miss Gulch's impatience with Toto. There's nothing worse than an annoying neighborhood dog. Miss Gulch is a woman who takes action and doesn't just sit around and wait for things to happen. She jumps on her bicycle and pedals over the dusty country road to confront the Gale family. She could care less if there's a cyclone brewing. She's prepared for anything. She has already been to the Sheriff to obtain a legal document giving her permission to take the dog. You go, girl!

As for the Wicked Witch of the West. . . what do you expect when someone kills your sister? Even though the legal term is "manslaughter," you don't come back from something like that. Just sayin'.

Would you confront your neighbors about their annoying dog?
Posted by Luana Krause at 5:00 AM 9 comments:

Jerry Reed is fabulous! This movie made me want to be a trucker! 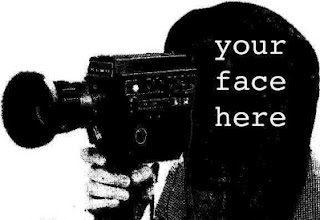 Pet Peeve: Hollywood's penchant for rehashing old movies and TV shows. Seriously, do we really need another Men in Black? In 3-D no less?

Hollywood is a wimp. It plays it safe. No risk. No edge. Of course it's all about the money. They have to sign those checks to the big stars and making a movie is not cheap when you're caught up in the Hollywood Machine. That's why there is a revolution in filmmaking. Movies and TV are changing and a new generation of  filmmakers are taking the lead.

Thanks to technology, the average Joe or Jane filmmaker can make a high quality movie without a huge budget. The Internet is changing TV and movies as well. Television networks are struggling to keep audiences. We should have seen this coming when Survivor started the reality TV craze of the past decade. Studios don't have to pay writers for scripts and thus they can save a bundle. Yeah, right.

Now the pendulum has swung and scripted shows are back with a vengeance. But it might be too late. Web TV is going to blow the socks off the entertainment industry. At least, that's my prediction and I'm not a gypsy with a crystal ball.

We now continue with today's program. . . 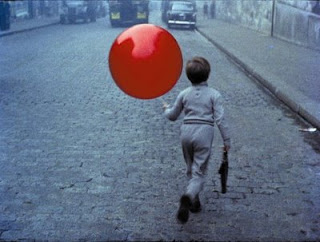 So I'm watching the Sundance Channel last week and come across a movie called "The Flight of the Red Balloon." The title intrigued me because I immediately thought of the classic French film "The Red Balloon" that I had seen in high school.

"The Flight of the Red Balloon" is only vaguely inspired by the original, but what they have in common is a little boy, a red balloon and Paris. That was enough for me.

I loved the film. It was in French with English subtitles, which was great for me because I'm learning French and it helped me with the language. Ooh La La!

The Story: Suzanne and her son Simon live in Paris. She is a single mother who works as an actor in a puppet theatre. She hires Song, a young Taiwanese film student as a nanny for Simon. The movie presents the every day life of the characters and how they relate to each other. There is no major conflict or dramatic moment. The story is mostly about the harried life of Suzanne and the affection between her and her son, and also between Song and Simon and between Song and Suzanne. (Notice that all their names are an alliteration?)

The strong points in the film are the cinematography and the visual metaphors. The color red is a theme and I had much fun looking for "red" in the images. The balloon itself was a minor character and didn't appear very often. But when it did, it was compelling and drew you in. The visuals were stunning throughout.

There were very long takes, which was fascinating to watch. It's really amazing when you can see a scene in a film played out that way with no interruptions. It gives the actor time to develop the scene and see what they can do with it.

If you're in the mood for a deep, reflective film experience, and not in a hurry for "something to happen," and if you enjoy lovely cinematography -- and Paris -- then you will be impressed with this film, as I was.

The Sting is one of my all time favorite flicks. Not only is it a great story, but it showcases the amazing talents of Paul Newman and Robert Redford, in addition to Marvin Hamlisch's brilliant score featuring the music of Scott Joplin.

This movie inspired me to learn Joplin rags on the piano. I learned to play The Entertainer, Pineapple Rag, Solace and The Easy Winners.

Posted by Luana Krause at 11:07 AM No comments:

Superman was the first movie I ever saw on VHS. I remember the day when the kids and I went to Montgomery Ward and bought our first VCR in 1984. Unfortunately Hubby was away on a TDY in the Air Force and not available for the masculine duty of setting up the VCR. But my grandpa came to the rescue. The kids and I headed to Blockbuster and picked out a movie. We all agreed Superman would be cool. We had not seen it yet and we were excited.

We sat on the couch with our popcorn and popped in the tape. We were mesmerized when we saw the fabulous images in the opening credits accompanied by this dynamic music. I will never forget that day.

Gary Cooper at the Office

What Do I Have in Common with Ingrid Bergman? 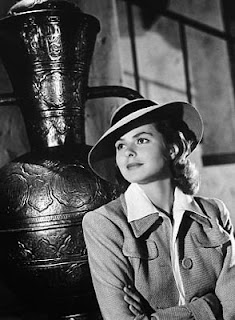 We both play "Ilsa Lund" in "Casablanca"!

I was cast in the CLTP's production of "Casablanca/The Maltese Falcon Radio Drama"!

As if that weren't fabulous enough, I was also cast as Brigid O'Shaughnessy in "The Maltese Falcon"! So I have something in common with Mary Astor as well.

The auditions were a blast. We have a Foley Artist who will be doing the sound effects. And best of all, everyone who auditioned was cast in the show! I love when that happens. 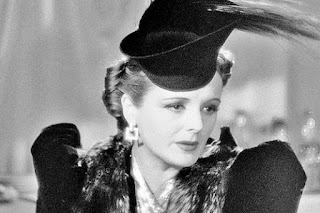 Posted by Luana Krause at 12:33 PM No comments:

As a die hard Beatles fan and later, a Wings fan, I was blown away by this song back in the day. Who would have thought Paul McCartney would be on a James Bond soundtrack?

My birthday was April 28 and of course I went to the movies. "The Raven" was playing and I was thrilled. I'm a fan of Edgar Allan Poe and also of John Cusack. Perfect combination. I've got to give a shout out to Cusack for his amazing performance. I never realized until I saw this movie what a versatile actor he is. Comedy, drama, romance, action...he's a master at them all. This is what happens when a great script and a great actor get together.

Director James McTeigue captured the haunting tone of the story with superb sets and costumes, as well as stunning cinematography (my favorite part of filmmaking). I also applaud the fabulous score by Lucas Vidal.
I don't typically watch movies more than once at the theatre, but I'm going to see this again. It is truly amazing on the big screen.

I saw a documentary called "Garbage! The Revolution Starts at Home" on the Sundance Channel last week.

The film followed a family of five (two adults and three young children -- including a baby in diapers) to see how much garbage they accumulate in a three-month period. I was blown away by how much we all contribute to pollution without even knowing it. This film really opened my eyes. I'm going to change my wasteful habits and make a difference. Starting with no more bottled water.

Posted by Luana Krause at 11:09 AM No comments: