I've been doing a lot of thinking lately about food in movies. It seems like every movie has food involved at some point. What are your faves? Here are few memorable food scenes that come to mind: 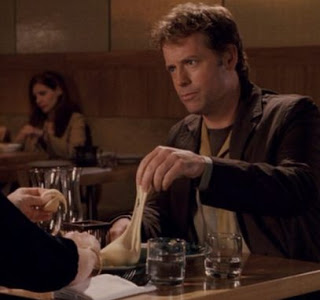 YEAST (Baby Mama)
Kate and Rob eat yeast on their first date. "All right, here's your blue-green algae and a yeast bowl for the table." 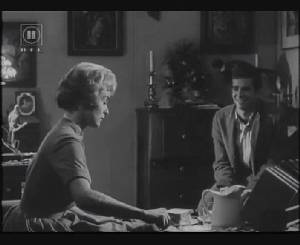 SANDWICH (Psycho)
Norman serves Marion a sandwich. "You eat like a bird." 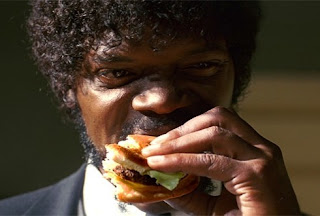 HAMBURGER (Pulp Fiction)
Jules eats a Big Kahuna Burger just before he blows Brett away. "Hamburgers! The cornerstone of any nutritious breakfast."

LINGUINE (The Odd Couple)
Oscar smashes a plate of linguine against the wall. "I'm not cleaning that up!" 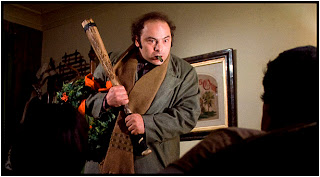 ROAST TURKEY (Rocky)
Paulie tosses the Thanksgiving turkey out the door. "You want the bird? Go in the alley and eat the bird!" 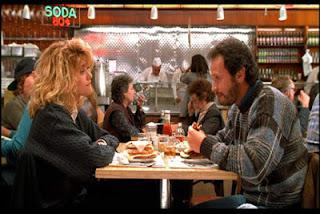 APPLE PIE ALA MODE (When Harry Met Sally)
Sally orders apple pie. "But I'd like the pie heated, and I don't want the ice cream on top. I want it on the side, and I'd like strawberry instead of vanilla if you have it. If not, then no ice cream, just whipped cream, but only if it's real. If it's out of the can, then nothing."


An historic week for this film buff. I saw Ingmar Bergman's "The Seventh Seal" for the first time. My MIND is BLOWN!

Thanks to my wonderful son who gave me a Netflix subscription recently, I've been having a blast watching movies that I've always wanted to see. "The Seventh Seal" was at the top of the list.

The cinematography is unbelievable. My mind is reeling (no pun intended).

The dialog is captivating, and along with the amazing visuals and motifs, the themes of death, faith and God's silence are sublimely expressed. I watched it twice and am going to watch it a few more time before I return it.

So what's the movie about? The story is set in the Middle Ages during the Black Plague. A knight named Antonius Block (Max von Sydow) and his squire return home from the Crusades. On the way, Death (Bengt Ekerot) approaches Antonius to take him away, but Antonius challenges Death to a game of chess: If Antonius wins, he gets to live. If Death wins, Antonius will die. Antonius meets a family of traveling performers, including Jof (Nils Poppe), an acrobat who has visions and can see into the spiritual realm. Antonius struggles with questions about God and the meaning of existence. He wants to make his life count for something. In the end, he helps Jof and his family escape Death.


As a die-hard Woody Allen fan, I knew it was only a matter of time before I would see an Ingmar Bergman film. If you know anything about Woody Allen, you know that Bergman is his greatest inspiration.

Interestingly, Max von Sydow was cast in the Woody Allen film "Hannah and Her Sisters," playing the artist lover of Lee (Barbara Hershey).

Next on Netflix: Ingmar Bergman's "Wild Strawberries" and "Cries and Whispers.