Nixon in the Movies and My Election History


I remember the day that President Nixon announced his resignation. I was 17 and my family and I were visiting friends at their home here in Cheyenne. We were all gathered around the TV and my parents and their friends were discussing what this means for the country. I wasn't interested in politics at that time and only had a vague idea of what the Watergate scandal was about.

But I knew this was something big and that it was one of the most historic moments in American history.

When I saw All the President's Men (1976), I was mesmerized. It beautifully dramatized the incredibly journey of Bob Woodward and Carl Bernstein and everything they were up against in exposing Watergate.

Of course, Robert Redford and Dustin Hoffman made it that much more appealing.

I wasn't impressed with Oliver Stone's Nixon (1995). It was uninspiring. Perhaps it was the script because I can't blame Hopkins, he was SUPERB as always.

Thankfully, Ron Howard directed a film about Nixon that was on par with the near-perfection of All the President's Men. Frost/Nixon (2008) is based on the play by Peter Morgan,about the famous David Frost/Richard Nixon interviews. Michael Sheen as Frost and Frank Langella as Nixon were astounding performers. Both actors appeared in the stage play and reprised their roles for the film.

So where am I going with all this Nixon stuff?

I was reflecting on my voting history. I have been voting in presidential elections since 1980. I've noticed over the years that there were very few times in which I voted FOR someone. I was usually voting AGAINST the other person.

Here is my voting record:

1980 - John Anderson
It was my first time voting. I was eligible to vote in the 1976 election but a lot was going on my life and voting was at the bottom of my priority list. I voted for the Independent John Anderson because I was rebelling against the Party System. It was not a vote FOR Anderson.

1984 - Ronald Reagan
Reagan had been president for four years and I thought the country was on the right track. Hubby was active duty military at the time and Reagan was VERY supportive of the military.

2004 - George W. Bush
Voted FOR Bush again. I thought he handled 911 well and even though we were immersed in war, I believe he did the best he could under the circumstances.

2008 - Barack Obama
I voted for Obama because I was totally AGAINST Sarah Palin. If McCain had chosen any other running mate, I would have voted FOR McCain.

2012 - Mitt Romney
This was simply a vote AGAINST Obama.

2016 - ?
I would like to vote FOR Ben Carson, if he becomes the Republican candidate.  I will not vote for Donald Trump and I do not trust Hillary Clinton. 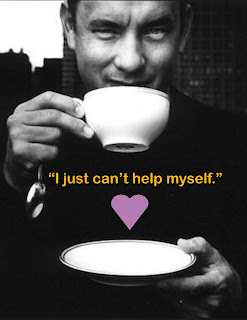 One word I would you use to describe my wonderful hubby of 39 years is Quirky.

You might be asking yourself, "Just how quirky is he?"

Lately he's been wearing bizarre bright green sneakers. He gets odd looks. I'm getting used to it.

His latest episode of quirkiness was inspired by the movie You've Got Mail. We both love the movie and watched it again a few days ago. Now he's quoting a line from the movie. He looks me in the eyes and with a dramatic flair, proclaims, "I just can't help myself!" It's a line that Frank (Greg Kinnear) says when he's talking about the news anchor lady on TV.

Hubby says it when he makes coffee, when he eats pistachios, and when he kisses me good morning.