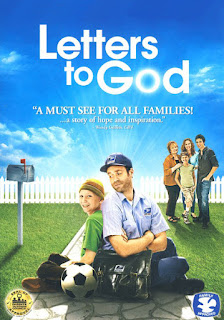 I've been watching Christian films lately and am delighted at the quality of these movies. In the past, faith and inspirational films overall, were not well done.

The best I had seen were the The Perfect Stranger films where Jesus appears on earth as a man in our modern era. He has dinner with a woman who is a skeptic, and he simply answers her questions about God. Kind of like, if you could have dinner with God, what would you ask him?

As a Christian, I am pleased to see quality acting, scripts and cinematography in faith-based films. Although there still seems to be an overabundance of "the end of the world" scenarios. I'm not a fan of these types of film in general (the Revelation Road series is the exception).

There are quite a few Christian films on Netflix and Amazon. This weekend I watched Letters to God (2010) and really enjoyed it. It is inspired by a true story about a boy who has cancer. He writes letters to God and sends them in the mail. A postman who is struggling with alcoholism and its effects on his family, gets the letters and they begin to change his life. And not only the postman's life, but the lives of the boy's family, friends and the entire community.

My favorite scene is where Tyler (the boy) talks with his friend's grandfather, played by Ralph Waite. The grandfather tells him that he is hand-picked by God to be a warrior. A warrior to help others and lead them to faith.


Welcome to my Denzel Washington Tribute. I recently watched The Equalizer on Netflix and although I'm not a fan of graphic violence and profanity, the character of Robert McCall, played by Washington, was inspiring. This tragic story tells of  McCall's desire to live a "normal" life, yet he realizes that "you gotta be who you are in this world."

I'm watching the movie and rooting for McCall all the way through because these bad guys are the absolute WORST! The final scene in Moscow is a total mind blower. McCall destroys the entire Russian Mob single-handed. Where else can this happen except in the movies?


"You gotta be who you are in this world, no matter what."

"This is going to sound real stupid coming from a man in prison.
But for the first time in my life, I'm free."

"It doesn't have to make sense. It's faith, it's faith. It's the flower of
light in the field of darkness that's giving me the strength to carry on."

"I am here to help you to find, take back, and keep your righteous mind."

"Hate put me in prison. Love's gonna bust me out."

"No I'm not like everyone else, Son. Everyone else ain't your father."


TRIVIA: This film was a remake of the
The Bishops's Wife (1947), starring Cary Grant.

"In my humble opinion, in the nuclear world, the true enemy is war itself."


"With all due respect, your honor, we don't live in this courtroom, do we?"


TRIVIA: The rights to "The Pelican Brief" were bought before the
book was even written, John Grisham had written a sample
from the book and the rights were bought on the spot.


"We didn't land on Plymouth Rock. Plymouth Rock landed on us!"
Posted by Luana Krause at 11:49 AM 1 comment: