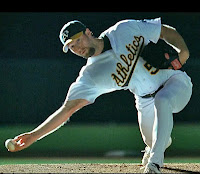 Finally got around to seeing Moneyball. WOW! Definitely Oscar worthy.

Brad Pitt has not been one of my favorite actors, but with this performance I'm gonna have to change my mind. I guess he IS an actor after all. I'm truly impressed.

The skillful adaptation; the movie is based on true events yet creates drama and suspense. The concept of creating a winning ball team based on statistics alone. WOW!

The relationship between Billy and his daughter. Her singing and playing the guitar not only developed the characters but was a lovely interlude that brought balance to the testosterone-heavy scenes.

BILLY BEANE: There are rich teams and there are poor teams, then there's fifty-feet of crap, and then there's us.

BILLY BEANE: Would you rather get one shot in the head or five in the chest and bleed to death.

So now I'm thinking of my favorite baseball movies:

And let's not forget the Seinfeld episode with Keith Hernandez and the JFK movie parody:

NEWMAN: June 14, 1987.... Mets Phillies. We're enjoying a beautiful afternoon
in the right field stands when a crucial Hernandez error to a five run Phillies
ninth. Cost the Mets the game.

KRAMER: Our day was ruined. There was a lot of people, you know, they were
waiting by the player's parking lot. Now we're coming down the ramp ... Newman was in front of me. Keith
was coming toward us, as he passes Newman turns and says, " Nice game pretty
boy.". Keith continued past us up the ramp.

NEWMAN: A second later, something happened that changed us in a deep and
profound way front that day forward.

ELAINE: What was it?

NEWMAN: Then I turned and the spit ricochet of him and it hit me.

ELAINE: Wow! What a story.

JERRY: Unfortunately the immutable laws of physics contradict the whole premise
of your account. Allow me to reconstruct this if I may for Miss Benes as
I've heard this story a number of times.

JERRY: Newman, Kramer, if you'll indulge me. According to your story Keith
passes you and starts walking up the ramp then you say you were struck on
the right temple. The spit then proceeds to ricochet off the temple
striking Newman between the third and forth rib. The spit then cam off
the rib turned and hit Newman in the right wrist causing him to drop his
baseball cap. The spit then splashed off the wrist, Pauses In mid air
mind you- makes a left turn and lands on Newman's left thigh. That is one
magic luggie.

JERRY: What happened to your head when you got hit?

KRAMER: Well. uh, well my head went back and to the left

KRAMER: Back and to the left

ELAINE: So, what are you saying?

JERRY: I am saying that the spit could not have come from behind ... that there had to have been
a second spitter behind the bushes on the gravelly road. If the spitter was behind you as you claimed
that would have caused your head to pitch forward.

ELAINE: So the spit could have only come from the front and to the right.

JERRY: But that is not what they would have you believe.
Posted by Luana Krause at 6:31 AM 5 comments:

I've always been impressed with people who do impressions. Back in the day it was Rich Little, Frank Gorshin, Sammy Davis, Jr., Robin Williams, Billy Crystal, Will Ferrell, Dana Carvey, Jim Carrey. I never got tired of watching them...so funny!

When I was in high school, I would lock myself in my bedroom and do impersonations. I didn't have the nerve to do them in front of anyone. But I think I was pretty good. I did Barbra Streisand, Doris Day, Judy Garland, Liza Minnelli, Dolly Parton, Jackee, Cher, Edith Bunker, Julie Andrews, Zsa Zsa Gabor and a bunch of cartoon voices. I also liked doing accents.

Anyway, here is a cute video of Melissa Villasenor. She reminds me of myself when I was young...but she has way more confidence than I did.

Kate & Leopold (2001) is a mind-blowing time travel flick that you'll never figure out in your wildest dreams.

STORY IN A NUTSHELL: Stuart (Liev Schreiber) discovers a portal in time and goes back to 1876. He unintentionally brings a Duke named Leopold (Hugh Jackman) back with him to the future. Hilarity ensues.

I've seen this movie at least half a dozen times over the years and I just discovered that Stuart's shrink, Dr. Geisler (Spalding Gray) was eating Grape Nuts cereal out of the box during his discussion with Stuart, whom everyone thinks is "NUTS" because of his wild story about a portal through time.

I also connected Kate's assistant, Darci (Natasha Lyonne) with Mr. Darcy from the novel, Pride and Prejudice, one of the most well-known romances in world literature. Darci is a hopeless romantic, opposite of Kate, who is a practical tomboy without a feminine bone in her body.

1) I LOVE time travel flicks and trying to figure everything out. It's an exciting puzzle.

2) The question of romance in the modern era. Are the old ways of courting still valid today? From watching this movie, the answer would be YES.

3) Leopold's adventurous spirit in experiencing the "future." As an inventor and nonconformist of his own time, he is not totally freaked out by modern day technology (toaster, TV, telephone, cars, etc.). He's inquisitive and open-minded.

4) The bizarre union of a modern, corporate-climbing New Yorker and a romantic, gentlemanly Duke of the 19th century.

Some of my favorite scenes:

Kate and Charlie sit up and take notice when Leopold describes dining in the 19th century after eating a meal of tater tots and microwave chicken fried steak. ("Where I come from the meal is the result of reflection and study. Menus are prepared in advance, timed to perfection. It is said that without the culinary arts, the crudeness of reality would be unbearable.")

This may not be your cup of tea, but it's definitely not your typical Boy Meets Girl romance.
Posted by Luana Krause at 5:32 PM 4 comments: 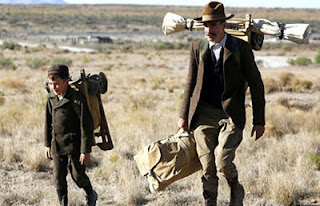 I realized a few years ago when I saw There Will Be Blood (2007), that Daniel Day-Lewis is the best actor in the world.

This is not an understatement. After watching him play Daniel Plainview, the greedy, evil oil prospector in There Will Be Blood, I had some catching up to do. I went back and watched My Left Foot (1989), The Last of the Mohicans (1992), In the Name of the Father (1993), Gangs of New York (2002).

I'm looking forward to his new film, Lincoln. Who better to play Honest Abe? From what I understand about Day-Lewis, is that he actually stays in character throughout the shoot, even to the point of having the stage crew wheel him around in a wheel chair when he played a paraplegic in My Left Foot. I wonder what eccentricities he might display on the set. Any ideas?

As for There Will Be Blood, his character was mesmerizing. Although Plainview was totally evil and had no remorse for the way he treated people, there was something about him that was sympathetic.

The film has so many wonderful scenes, it's hard to pick my favorite:

The baptism of Plainview. (Metaphorically speaking "baptism" is a theme in the movie --- baptism of water to save the soul, baptism of black oil shooting out of the ground and covering Daniel from head to toe, baptism of blood when Plainview kills).

The explosion of the oil well that causes his son's deafness.

The shore of the lake where he is talking to his "brother" and realizes the truth.

Plainview's office where his son, as an adult, comes to ask for help in starting his own oil company.

The confrontations between Plainview and Eli (Paul Dano). These scenes were so intense...well done by both actors.

As for the technical merits of the movie, the art direction and cinematography were beautiful. Especially breathtaking were the shots the burning oil well at dusk and into the night. This was a turning point in the movie and the director (Paul Thomas Anderson) built up the tension in this scene, both visually and through the actors.

The only draw back for me was the final scene at Plainview's home. The bowling alley was rather absurd and the "I drink your milkshake" line was bizarre, to say the least. I have no idea why this wonderful movie would have such a ridiculous finale. I wish I knew what the director was thinking.

I saw this film when it opened in theatres in 1993 and was immediately gripped by the jazzy music. First of all, this is my favorite style of music. Second of all, I LOVE piano. Third of all, THIS MOVIE ROCKS!

The music gave this story an edge by building suspense, enhancing the storyline, and capturing the Memphis blues feel of the setting. In fact, all the songs on the track are amazing -- Memphis Stomp, M-O-N-E-Y (Lyle Lovett), Mud Island Chase. This was my first introduction to Dave Grusin, who just so happens to be the composer of a number of other film scores, including The Graduate, The Champ, The Fabulous Baker Boys, The Goonies, Hope Floats.

Posted by Luana Krause at 6:52 AM No comments:

Here's wishing everyone a blessed New Year! I love new beginnings; wiping the slate clean and starting over. Hope and Great Expectations.  I like the verse in the Bible that says, "forgetting what is behind and looking forward to what is ahead..." (Philippians 3:13).

Hubby and I spent New Year's eve hanging out watching TV. As a result, the last movie I watched in 2011 was The Karate Kid (Ralph Macchio version). It's one of our favorite films. Wax on, wax off; sand the floor, paint the fence, paint the house...

I chose this movie for the Letter K in the A to Z Blog Challenge.

MIYAGI: Lesson not just karate only. Lesson for whole life. Whole life have a balance. Everything be better. Understand?