T is for Toto 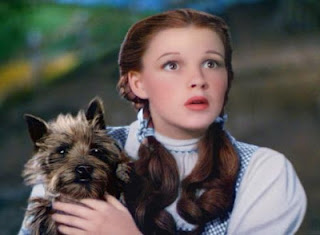 THE STORY: Dorothy longs for a place over the rainbow and ends up in the Wonderful Land of Oz. It's beautiful and magical but there's no place like home.

ABOUT TOTO: Toto is the catalyst of everything that happens. He gets taken by Miss Gulch and Dorothy has to run away to keep Toto safe. It's his fault Dorothy wasn't in the storm cellar when the cyclone came. Toto led the Scarecrow, Tin Man and Lion to the witch's castle so they could rescue Dorothy. He's also the one that caused Dorothy to miss the balloon ride with the Wizard, thus allowing Glinda, the Good Witch of the North, to show her the lesson of the ruby slippers. Now that's some dog!
Posted by Luana Krause at 5:00 AM