G is for Goats 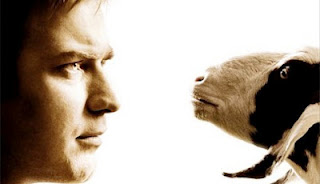 "The Men Who Stare at Goats"

THE STORY: Bob Wilton, a reporter goes to Kuwait with Lyn Cassady, a former special forces agent, and learns about the New Earth Army who were trained to use psychic powers in warfare.


ABOUT THE GOATS: The goats were flown in from South America, de-bleeted, and used for psychic experiments. In the secret goat laboratory, soldiers practiced stopping the goats hearts by staring at them. Back when the experiments were going on, Lyn used his psychic ability to kill a goat in this manner. He always regretted it. Later, when Larry Hooper started the goat experiments again, Lyn released the goats into the desert.


Do you like goat cheese?
Posted by Luana Krause at 5:00 AM