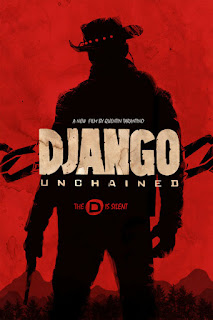 Having a grand old time looking for interesting things in Django Unchained.

White towels on the front of the bar in the saloon in Daughtrey, Texas and white sheets of the Klansmen in Tennessee.

Schultz is a dentist and Calvin Candy has rotten teeth.

Candy holds up fingers as he's counting. In the bar scene in Inglourious Basterds, the American holds up three fingers which tips off the Nazi about the American in disguise. Shoot out follows.