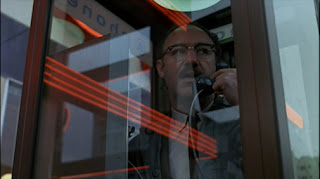 So I'm browsing through my Netflix streaming videos and find a fabulous movie called "The Conversation," directed by Francis Ford Coppola and starring Gene Hackman. Released in 1974, the story is about a surveillance man who gets caught up in a murder plot. Other cast members include the pre-"Star Wars" Harrison Ford, John Cazale (from "The Godfather") and Cindy Williams ("Laverne & Shirley" fame).

First of all, this was one of Gene Hackman's best performances ever. His character, Harry Caul, is paranoid, introverted, and secretly plays jazz on his sax in his living room. Hackman skillfully brings this intriguing character to life.

Another fascinating thing about the movie is that in 1974, surveillance technology was pretty primitive compared to today, so it was interesting to see the use of dial telephones, bulky recording devices and reel-to-reel tapes.

What really knocked me out was the incredible cinematography. The shots were stunning. I particularly liked the shot of Harry near the staircase in the hall way at Amy's apartment which revealed his suspicious nature and his awkwardness in social and romantic situations. A cool cinematic technique I've seen in other films was used here as well -- the camera is fixed on a stationary object in the room as the actor moves in and out of of the frame and speaks off screen. All I can say is "mind blown"!

I checked the IMDB and found out that the cinematography (director of photography) was done by Bill Butler and Haskell Wexler - UNCREDITED! Why, I wonder, were they uncredited? Was it because of a legal issue? Did they not want their names attached to the film? Inquiring minds want to know.

If you've never seen this movie, check it out. You'll love the surprise twist at the end.